So when last we left I had been through many of the cheaper options out there to try and keep my fingers from becoming iced up while riding to work, or mountain bike riding at night during the colder months.  So I now began to search for a glove that made its own heat .

At first I found a few options, though most seemed bulky and they were not inexpensive. I did find one cheapish pair of gloves, but they operated on 2 D cell batteries. Yikes! That would end up being rather pricey. And the reviews seemed to indicate that they really only produced heat in the palms of your hands, which is not what I wanted anyway. In fact many of the heated glove options I did see were similar. They really just heated your palms and it was hoped the heat would spread out.

I finally did find a site that was based around motorcyclists or ski dooers. They looked like standard winter gloves but had a decent heating element in them. At least that is what they claimed. And the price seemed okay at $100 a pair give or take. But see what I didn't notice until I read deeper was that they ran off the battery of the motorcycle. Hmmm, that was no good. You could buy a battery  kit and harness for them, but that would kick the price up significantly. And they had no user reviews. I mean I assume they probably worked, but they weren't designed for cyclists and that likely meant they were bulky. Also ordering these would mean ordering from the States and hoping they would get here some time this winter, but also realizing that the cost would be increased that much more, especially if they got hit with customs. Also dealing with a third party retailer in a  foreign country, even the USA, is annoying most times.

So my search on the good old Google went deeper. And that is when I found a nice little company in Calgary called Power in Motion . Now what first drew me to this company was that they are a electric bicycle company. So at least we were started on the right foot here, people that new what cycling was all about. Also they were located in Calgary, which frankly get really cold in the winter. And the gloves were designed in house. All good things in my mind.

A quick email to the company got me into a nice chat with Ken, one of the company founders. They didn't have an outlet for their products any further east than Ottawa. But Ken's partner John was more than willing to sell me a pair of gloves and ship them off.

Now these gloves aren't super cheap or anything. The gloves alone cost $99 and then the wiring harness and battery cost another $60. But what I would get for that price was pretty decent and dealing with a Canadian company also seemed like a good thing.

These are glove liners with a gauntlet style wrist. You get 2 options for hooking up the battery. The least expensive option (which I started with) is a single 12v lithium ion battery that you can put in a back pocket or breast pocket inside your coat, from this a wire goes down each sleeve and attaches to the glove. It is really simple and quite comfortable. The gloves have a switch on the wrist that allows you to toggle through three heat modes: 50C, 40C, and 30C. And all the heat  comes from carbon fiber heating elements, which are strong and flexible, so you can't really tell they are there. The elements run along you the fingers and across the knuckles, so the warmth goes were it needs to. Oh and they are hand washable, always a nice thing. 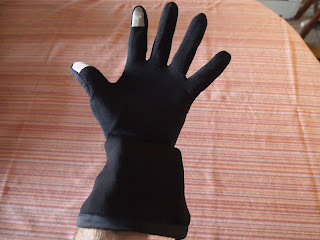 So this is the glove on. It is a spandex material, so it fits tight, and it needs to. You get the best heat when it is direct contact with your skin. This also allows you to rather easily slip another glove on top of it. This is of course essential to block the wind and water. But it also means you can get away with a  much lighter glove. Oh and notice the thumb and forefinger? They allow you to use touch screen devices like phones. 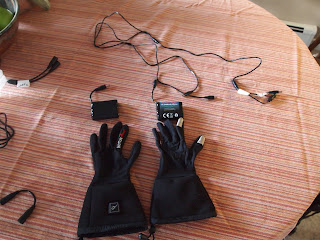 That is the whole setup. 2 gloves, batteries (I now have 2) and the wire to attach it up if you only have 1 battery. While the battery has a slight bit of bulk to it, it really isn't an issue with riding. It is under your wrist and you still have total freedom of movement. But if it is too bulky, the wired system works just fine.

I have been testing this system for a couple of week now and I am impressed so far. Though temps haven't been super cold since I go them, I have gone riding on days were it is easily colder than -10C with the wind chill. These days usually don't leave me as a happy handed cyclist.

As a test I have also been riding with only 1 glove activated but with the other glove in place, to see what difference the heating element actually makes. And I have finished my rides with one warm hand and one cold hand.  They are really great. And since they are glove liners, they should have a decent life span to them. My journey now is to find a better light weight over glove to wear with them. My current gloves are, frankly, a bit bulky. Ideally I will find something like a heavy water resistant nylon glove.

So how is the battery life in these things? Perfect for a commute. A single battery system can easily get 1.5 hours on max heat. My commute is 45-55 minutes long and it wasn't an issue. And I just throw the charger into my bag and plug them in at work. If you did drain them, it seems to take a bout 3 hours or so to get a full charge back. And when used on a lower setting or used with a 2 battery system, you get hours out them.

Was it worth it price wise? Yup. I figure anything that is a reasonable price and keeps me wanting to cycle as much as possible is a good thing. The cost of 3 tanks of gas in my car, so that is well worth it. And no sitting in traffic!

And I have been chatting with Ken about his upcoming projects. They currently have a 900 lumen light that runs on the same battery system. And you can actually hook the gloves and lights up together. I haven't had a chance to test out the light yet, but I do like the sound of it. And there is the possibility of heated socks in the pipe line as well, oh my!

So if you are like me and want to cycle as much as possible and get dang cold hands when the temp dips below zero, these are a pretty darn good investment.

I'm going to keep testing these (and by testing I mean wearing everyday) and look forward to a cold snap! check out the website for Power in Motion and specifically the heated gloves page . There is a video of the gloves and it is what sold me on exploring things further.

Update Jan 2014: I have written a new blog post about how my gloves are doing one year later (good is the quick answer). You can read it here:
http://ianloughead.blogspot.ca/2014/02/a-cycling-commuters-dream-power-in.html
Posted by Ian Loughead at 5:58 PM

This blog is really helpful for the public .easily understand,Thanks for published,hoping to see more high quality article like this.
Next page
Helpfull hints
Publish here
Main page

Great share, this guide very helpful and is great for what I am looking, along with this I also referred best battery heated mittens, it will also help to best buy. 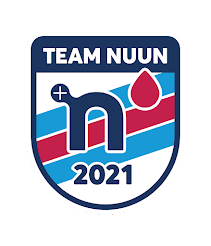